I‘m pretty sure that no matter what differences may exist between us in terms of our ages, backgrounds, or cultures, we would all agree that toys and games of some sort or another were an essential and prominent part of our childhood years.

Play is universal, after all!

I grew up in the late 1960s and 1970s, long before computers and tablets and game systems became a normal part of life… and though I do love my electronic gadgets now, I must admit that I look back fondly on my low-tech, imagination-filled childhood. 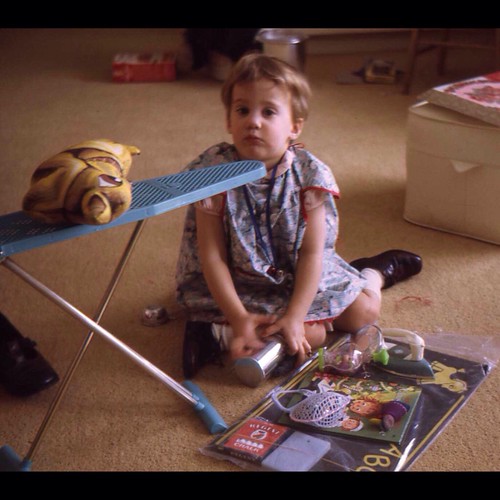 I remember spending a lot of time outdoors with friends during the summer months. We would ride our bicycles around the neighbourhood (observing specific street boundaries that varied slightly from kid to kid), splash under the sprinklers (or beg to be allowed to do so!), and play various spontaneously organized games such as Tag, Mother May I?, and Hide-and-seek (with variations like Sardines or Kick the Can).

And hours, upon hours, upon HOURS were spent playing what Wikipedia calls Chinese jump rope but which my cohorts and I knew as Chinese skipping. I think this may have been a game played mostly by girls – each of whom had their own set of elastics – though I do remember some neighbourhood boys joining in on occasion. Chinese skipping involved an elaborate set of routines and rules, some of which we made up as we went along (“tag, tag, no erasies!”), and “good elastics” (not too thick, not too thin, and just the right amount of tension) were highly coveted treasures.

That’s me in the cream-coloured sweater.

When the weather cooled off, we moved indoors to play dressup games emulating “real life” such as house, school, or store, each of us rushing to claim the coveted role by being the first to cry out, “I’m the mother/teacher/storekeeper!”.

If we didn’t feel like dressing up, out came our toys and board games! Anyone remember Spirograph, Silly Putty, Etch A Sketch, DoodleArt, Lite-Brite, Tinkertoys, or Magic Slate? How about Sorry!, Battleship, Clue, or Pay Day? These were all favourites of mine.

You know, in some ways it feels as though I never really grew up… at least not when it comes to my love of toys and games. Board game nights with friends are great fun, and I look forward to playing Dutch Blitz for (quite literally!) hours every time I visit my family. Tangling (another hour-stealing pastime) often reminds me of Spirograph and DoodleArt. And I’ll confess that I am always tickled by Lego Minifigures and the surprises hidden inside Kinder Eggs.

Well, so what? Sure, it’s important to be a responsible adult… but I say that growing up is highly overrated. 🙂

What were some of your favourite childhood toys and games?
Please share!