Home again, home again, jiggety-jig! Yes, I’m back in Windsor after a whirlwind trip across the continent to San Jose, California for BlogHer ’14. I had an absolutely FABULOUS time at the conference (more on that at a later date), and am now slowly returning to my regular routine – which, of course, will include plenty of tangling (just as soon as I can finish unpacking, catching up on laundry, clearing my Inbox, and so on)!

Before I get into today’s Tangled Tuesday post, though, I want to say a special thank you to the five wonderful bloggers who shared their words here on Alphabet Salad as guest posts while I was away. If you haven’t already read and commented on these wonderful pieces, it’s never too late – I invite you to check them out!

Now, on to the latest edition of Tangled Tuesday!

Even though I doubted I’d have time to use them, I did bring some tangling supplies with me to the conference. Always be prepared, right? But of course my instincts were correct, and I didn’t even find a moment to look at them! (True to form, I’m pretty sure that if I hadn’t brought them I’d have been dying to do some tangling!)

Still, it does inspire me to share a couple of items which, while not specifically tangling-related, are handy little tools you might want to include in your on-the-go drawing arsenal.

The first is called a journal bandolier, which is a stretchy band that fits snugly around your sketchbook and holds your pens, pencils, and so on. If you read the fine print on my picture you’ll see that I bought mine from a shop called cleverhands.net; unfortunately, though, their web site no longer appears to be up and running. But never fear! If you’re interested in buying something similar for yourself, it looks as though several Etsy sellers have stepped up to offer their own version of the product. 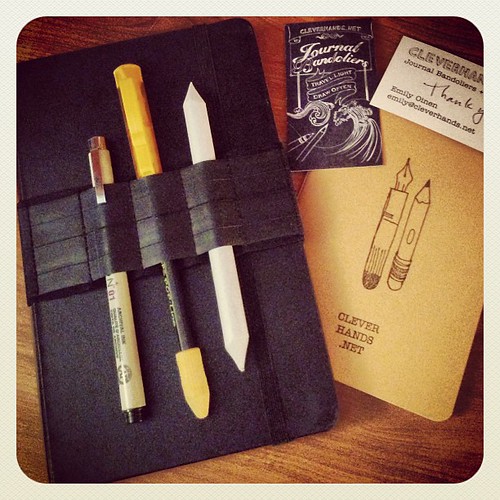 I’ve already written about two of the other items in my photo – Moleskine sketchbooks and blending stumps. The one I haven’t yet mentioned, though, is the handiest thing ever – a pencil with a KUM® POP-Line Sharpener at one end and an eraser at the other. Adding this all-in-one tool to a bandolier along with my other drawing supplies completely eliminates the need to carry a pencil case, which is exactly what I was trying to do – now I can just grab my sketchbook with its full bandolier and go. Highly recommended!

I’m afraid I didn’t add anything new to my tangle repertoire this week, but I’m sure there will be something next time!

I’m still in the early stages of the letter “L” in my alphabet series – here’s hoping I’m able to find some time to finish it off this week.

In last week’s post I alluded to a pre-BlogHer ’14 project I’d started. See, I’d been trying to think of something tangled I could wear or carry while at the conference – something that would be a good conversation piece to help give a visual explanation (beyond my Ten Thousand Tangles business cards) of tangling. When a friend directed me to a post about tangled sneakers, and strongly encouraged me to do some of my own, I couldn’t resist! I picked up some plain white canvas sneakers…

…and a couple of Sharpie permanent laundry markers…

…and got to it! It wasn’t too difficult, though it did take awhile to get used to working on a three-dimensional project, and also to draw my designs larger than I normally do to allow for bleeding. Still, I think the project turned out rather well, all things considered – here are a few shots to give you an idea of how the sneakers looked when I was done with them.

Unfortunately – best laid plans and all – I didn’t actually end up wearing them to the conference. I brought them with me, and wore them for most of Thursday while wandering San Jose with three blogging friends, but found them far too hot to bear and ended up buying an inexpensive pair of cute sandals to wear instead. (Of course the sandals gave me blisters, but at least my feet were cool!) Still, it was a fun project, and I’m glad I tackled it – it was a great experience to expand my horizons by working on a surface with shape and dimension.

This week’s tangling goals include:

Previous posts in this series are all tagged Tangled Tuesday.

For background on how I discovered and got involved in Zentangle, and links to further information and resources, check out my blog post For the love of tangling.

You can browse my entire tangle gallery at Ten Thousand Tangles.

And, if you’re interested in having a little piece of my art for yourself, please click on the GoFundMe button below for more information and also visit my Zazzle shop Ten Thousand Tangles. (Pssst… links to my international Ten Thousand Tangles shops are in the Alphabet Salad sidebar – just click on the appropriate flag and you’ll get to the place you need to be!)

1 The Zentangle® Method was created by Rick Roberts and Maria Thomas and is copyrighted. Zentangle® is a registered trademark of Zentangle, Inc. Learn more at zentangle.com.