Although I’ve done a decent amount of tangling this week, I’m afraid I’m approaching today’s Tangled Tuesday post from a place of slight discouragement. Oh, I’m still deeply in love with tangling… but lately I’ve found myself becoming “stuck” more and more – stuck for ideas, stuck for inspiration, stuck on trying to learn new techniques that should come with practice but just aren’t working for me. And I worry that I’m stagnating, allowing the whole getting stuck thing to keep me in a rut of repeating the same old stuff over and over and over again, and becoming a complete bore to myself and others in the process.

At times I’m frustrated and impatient, increasingly feeling as though I’ve taken myself about as far as I can go on my own. I keep thinking way back to the early days of web design when I taught myself HTML and designed some simple sites, but needed to take it to the next level – that is, build on the basics I’d learned on my own by going to school and getting my web design certificate – before I would be able to do anything bigger and better. Translated into the tangling world, I’m chomping at the bit to get to a CZT seminar already – to learn from the experts, to be properly trained, to draw on others for tips and inspiration, and then take what I’ve learned to grow creatively and share with others – but doing so seems miles and miles away. And when some kid who’s doing nothing more than making potato salad as part of an ironic Kickstarter campaign has managed to raise tens of thousands of dollars from thousands of backers ($53,739 from 4,175 backers at the time I’m writing this post), while my own little non-ironic campaign oozes along at the speed of molasses… well, it’s a little disheartening.

Anyway, enough of my whining! Actually, writing out my struggles has helped somewhat… though I debated as to whether or not I should even share this post. On the one hand, I’d far rather keep this space positive and upbeat – but on the other I do want to be honest and authentic, and right now, at this moment, I am honestly and authentically feeling a little discouraged. I guess if you’re reading this I decided to post it after all – and if you’re still with me, I thank you for listening.

This week I learned Floating Disks, Florz Variation, Flying Geese, Footprints, Frond, Germie, and Gewgle, all from Joy of Zentangle. (If you’re following along in Joy of Zentangle you might notice that I’ve been skipping a few of the designs. This isn’t because I didn’t like or want to do them, but because I’ve previously learned them through one of my other books. As I mentioned in an earlier post, there is often overlap and some repetition between the various Zentangle®1 books.)

I also learned Land Girlz and YAH, both designs which were posted this week on TanglePatterns.com.

Carrying on in my alphabet series, I’m well into designing the letter H and should be finished and able to share it in next week’s post.

I’m so happy to say that I’ve finished the letter G! 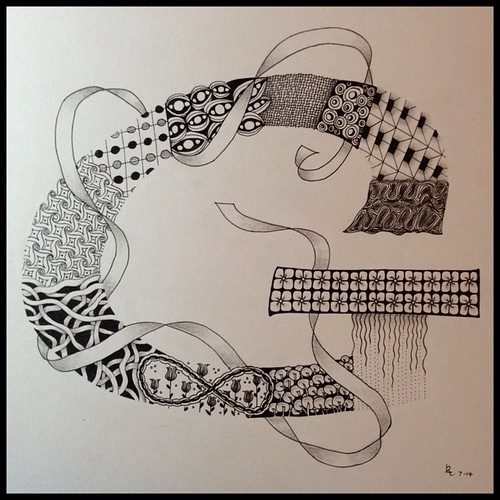 This week’s tangling goals include:

Previous posts in this series are all tagged Tangled Tuesday.

For background on how I discovered and got involved in Zentangle, and links to further information and resources, check out my blog post For the love of tangling.

You can browse my entire tangle gallery at Ten Thousand Tangles.

And, if you’re interested in having a little piece of my art for yourself, please click on the GoFundMe button below for more information and also visit my Zazzle shop Ten Thousand Tangles. (Pssst… links to my international Ten Thousand Tangles shops are in the Alphabet Salad sidebar – just click on the appropriate flag and you’ll get to the place you need to be!)

1 The Zentangle® Method was created by Rick Roberts and Maria Thomas and is copyrighted. Zentangle® is a registered trademark of Zentangle, Inc. Learn more at zentangle.com.