by Laurel Storey on December 20, 2016
in Artsy-Craftsy

After reaching my 100th Tangled Tuesday, I think I must have collapsed with exhaustion – not when it came to tangling (of course!), but as far as actually taking the time to share what I’ve been up to here on Alphabet Salad – yeah, that part kind of fell by the wayside.

It’s time to remedy this! But since I really don’t want to inflict another enormous catch-up epic on you (you’re welcome!), I thought I’d split my updates over a series of posts throughout the next week or so, with an aim to start fresh in the new year (perhaps with something ever-so-slightly different).

So off we go with Part 1 of my Tangled Catch-Up!

Since my previous Tangled Tuesday post I have learned the following new-to-me tangles.

From The Creative World of Eni Oken (Eni Oken, CZT):

I’ve now completely filled my tenth tangle pattern sketchbook (which seems a rather appropriate milestone, considering I recently completed my 100th Tangled Tuesday post). Just look at them all! 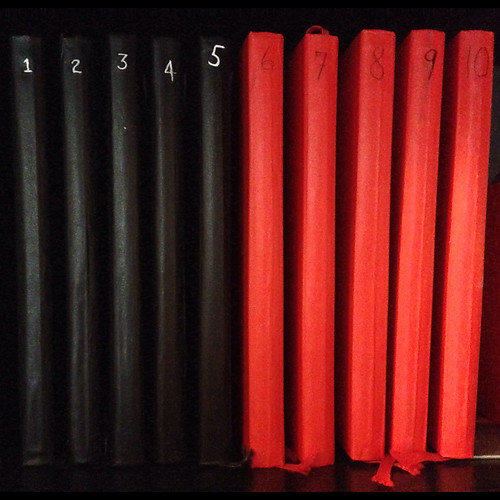 Five black, five red, so now it’s back to a black Moleskine Sketchbook for Volume 11.

Those many sketchbooks contain a total of 1,056 patterns, all of which I have learned since I started tangling in June, 2013.

If you’re interested in how I organize and keep track of the patterns I’ve learned, check out this post. It was written back when I had just three completed books under my belt, but I’ve stayed with the same system until now, so the post is still relevant.

This is probably long enough for the first catch-up, so I think I’ll sign off for the moment!