by Laurel Storey on December 5, 2015
in Artsy-Craftsy

Our seven-week-long Draw & Sketch class is just flying by – I can’t believe we’ve finished five sessions already! I’ll have to start pondering what (if anything) to do about my Sketchy Saturday series when the course ends… but in the meantime, here are the details of this week’s lesson.

Today’s class covered silhouettes: “the dark shape and outline of someone or something visible against a lighter background, especially in dim light.” We learned that in order for a silhouette to be effective, making use of the white space around the subject will help to clearly define the shape of the object or figure, and spent the whole class practicing the technique with a series of loose, non-detailed, cartoon-like figures.

We started with figures pushing an object, first something that didn’t require a lot of effort and the other heavier. 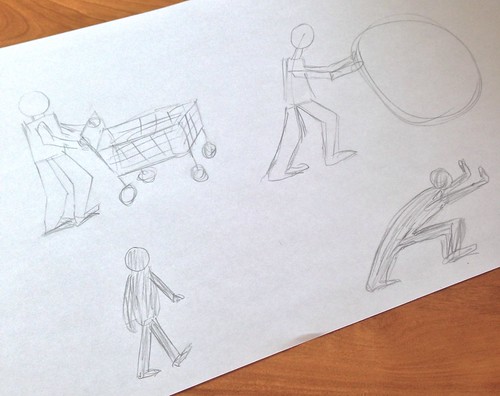 Then we moved on to the motion of pulling, first with a light object and then something heavier and more difficult.

After that we drew different figures holding on to a rope hanging over a pit of crocodiles (oops, I forgot the crocodile part in my drawing – consider them implied!) – one likely not to fall and one holding on precariously. I added another one climbing for good measure. 🙂 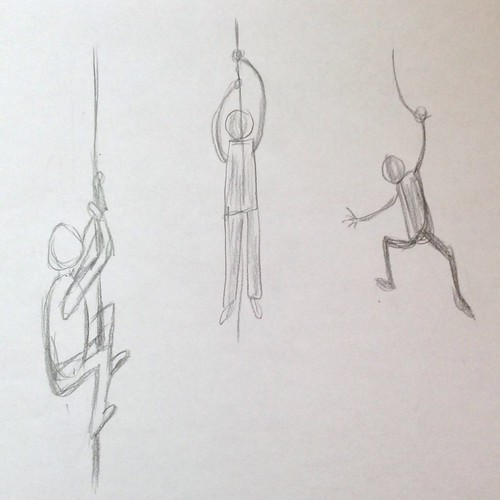 The next series of silhouette sketches were of figures holding a sword, in both relaxed and active poses. 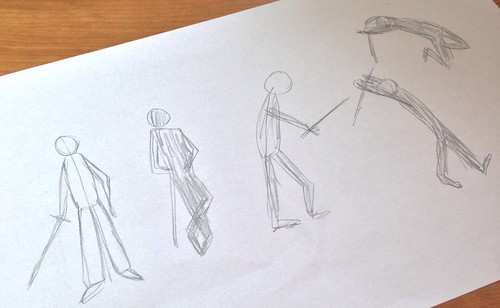 Moving on, we drew several figures about to open a door, approaching it in a variety of ways (confident, tentative, upset, anxious). 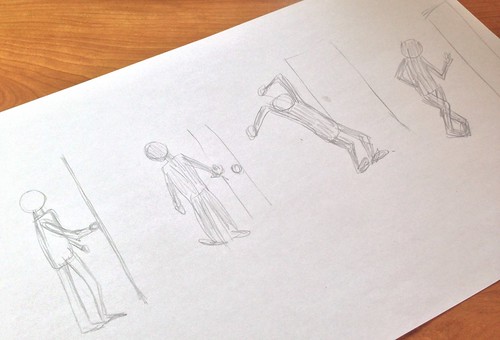 Finally we sketched out a couple of different simple story lines – the first of “Lightning Boy” in a series of poses and the second of a magician pulling something out of a hat – and in both cases we were to decide on the ending ourselves in the last picture.

My Lightning Boy didn’t get off to a very good start, so the end of the story is him sitting down on the bottom step and crying because he can’t fly. Poor Lightning Boy! 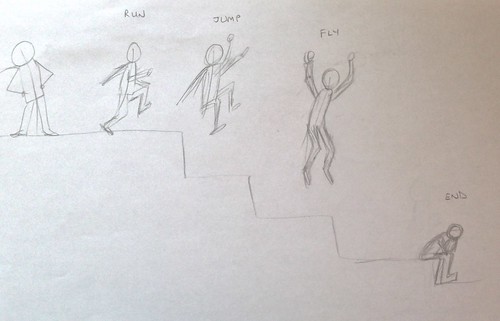 My magician, quite predictably, pulled a rabbit out of his hat. As you can tell, he’s rather bored by the whole process. (I should have taken a photo of our instructor’s series on the chalkboard – both were far more exciting and dynamic!)

I had a ton of fun, and my friend and I did a lot of laughing throughout the class, probably because neither of us were in a mood to take things particularly seriously that evening. You can probably pick that up from my drawings, which are quick and dirty and not at all compelling – but I enjoyed myself and learned a few new things, so it’s all good. 🙂

How have you been creative this week?
Please share!