by Laurel Storey on November 7, 2015
in Artsy-Craftsy

Welcome to the inaugural post in my brand spanking new “Sketchy Saturday” series! As a bit of background (and in case you missed it!), I signed up to take a seven-week Draw & Sketch class this fall along with a friend, and thought a “Sketchy Saturday” post each week on Alphabet Salad would be a great way for me to recap what I’m learning.

(As an aside… I’m always ready for an excuse to play with PicMonkey, so thought a new blog series warranted its own icon! This is a mashup of one of my recent photo a day challenge pictures and an old, old sketch from the last time I took a drawing class, waaaaay back in the 1980s.)

My first class didn’t actually get off to a very auspicious start. Our instructor asked us each to begin by drawing something – anything – so that he could get an idea of our individual skill levels and where we were starting out. Well, I totally blanked! I couldn’t think of a thing to draw, and was unable to even make a mark on the paper. It was a very strange and disconcerting feeling (not unlike staring forever at a blinking cursor when trying to come up with a blog post!), and I’m not sure exactly why it happened considering that I have no trouble at all tangling my heart out on a regular basis.

Anyway, while the others industriously got going on their drawings, I just sat there, frustrated and paralyzed – and, apart from waving my tangle-designed phone case at him to prove that I really have held a drawing implement before, I didn’t actually produce anything at the start of the class.

The first class was very introductory and covered using the three basic shapes – circle/oval, square/rectangle, and triangle – as the foundation of our drawings. We started off doing simple figures made up of each of the shapes, and experimented with ways to make them appear more dynamic. 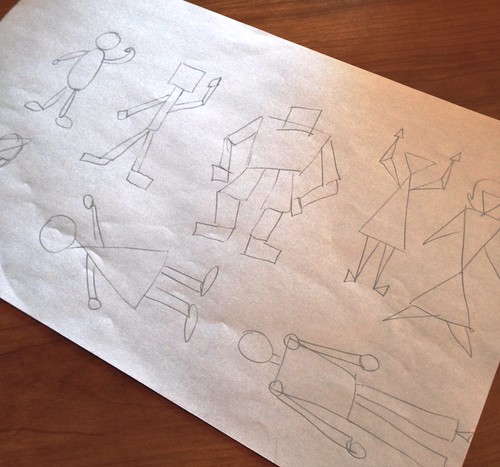 We then learned the term line of action, which when applied to our drawings of figures could be thought of as the spinal cord and would help give more direction and definition to our figures’ actions. 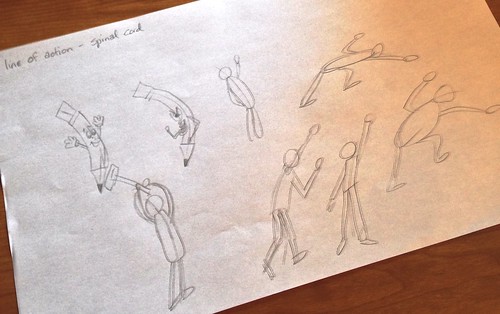 We drew a simple dragon from the basic shapes and line of action. 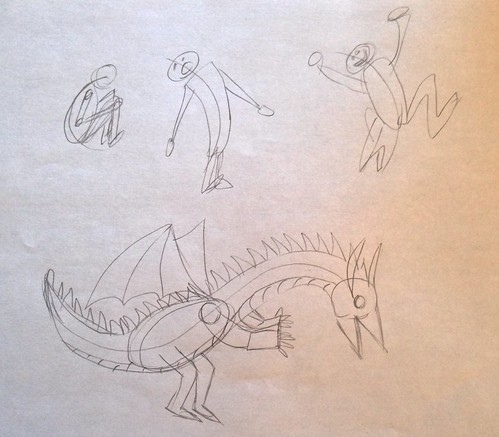 For the last part of the class we were to pick an example of a figure from a stack of pages ripped from comic books (it’s pretty evident where our instructor’s interests lie!) and build a drawing of the picture using the basic shapes and line of action techniques.

For my first drawing I chose Silver Surfer (the one on the right of the picture below), and actually had time to do a second as well, this time of The Flash (or is it just Flash? Don’t ask me – I’m not a comic book/superhero aficionado!). 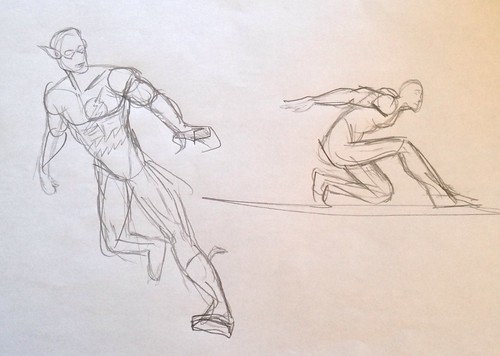 (I realized after the fact that I should have taken photos of the original pictures so that you could see what I was copying. I’ll try to remember next time!)

The base of each of the two superhero drawings started off as my own, but the instructor came along and added his own input in areas where he saw that more definition was needed. Still, I think I was generally headed in the right direction.

So that was my first class! All in all it was a rather humbling experience, and not exactly what I’d expected… still, I’m looking forward to seeing where it goes and how I progress in future weeks. Hope you return to follow along!

How have you been creative this week?
Please share!