On Becoming a Crazy Cat Couple

Once upon an October day last year, two of our good friends packed up their possessions and moved into the house they’d just bought. They thought it would be just the two of them living there; however, they soon discovered that they weren’t the only residents of the place! Unbeknownst to them, around the time that they were settling in, a feral mama cat had made herself a safe home under their front porch and had given birth to a litter of kittens.

A month or two later our friends discovered the little family under the porch and, though they were unable to get close to the cats, set out to care for them over the long, cold winter that followed by providing food and even stuffing warm blankets through a space in the boards surrounding their little haven.

In the meantime, over in our world, Peter and I were tentatively considering adding another cat to the family. We were still sad about the unexpected loss of our dear Grisabella last summer, and really missed having three cats around the house. An adoption opportunity presented itself shortly after Christmas, but ended up falling through – and when we happened to mention this in conversation with our friend the feral cat whisperer, she immediately said, “You should take one of our porch kitties!”

Peter was intrigued; me, not so much. I was already rather nervous about the idea of introducing a new cat into the house and changing the lovely dynamic between Felix and Oscar, and figured that bringing a feral cat into the mix – no matter how young – would only complicate matters more. No, I definitely wanted a NON-feral kitten – a girl, old enough to be separated from her mama, but still tiny – who was, preferably, orange. (Peter agreed with me about the orange part, at least!)

Months passed with the two of us still tossing the kitten adoption idea back and forth, uncertain how to proceed. Meanwhile, over at our friends’ home, plans had been set in place to trap and neuter the mama cat and her kittens through our local Humane Society’s TNR (Trap-Neuter-Return) program.

I’m pretty sure you can see where this is going.

I truly thought I’d learned the whole “never say never” lesson, but… well, long story short, instead of adopting one orange non-feral female cat, we ended up bringing the first of TWO black feral kittens – a little girl – into our home on April 23rd… 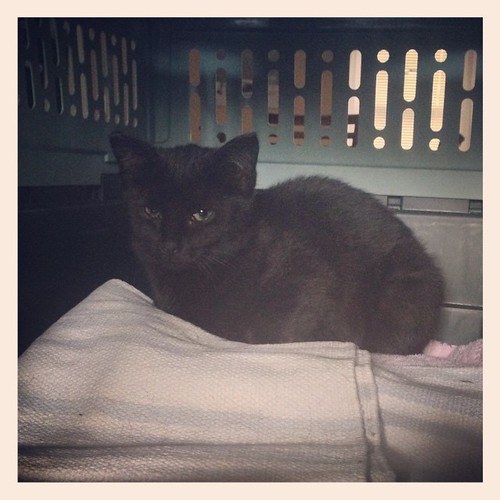 …followed by her brother on May 6th… 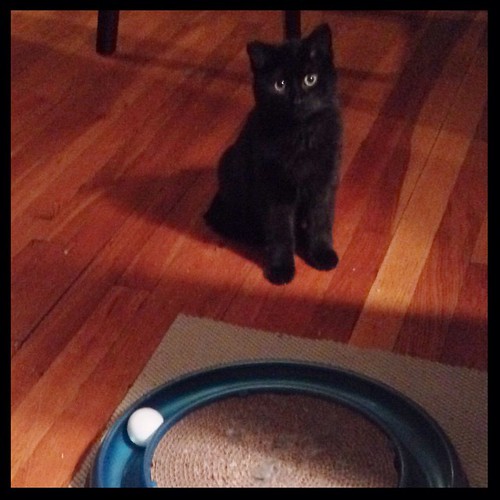 …which I’m pretty sure qualifies us for the title of Crazy Cat Couple.

We named the girl Mei-Mei, which is Chinese for “little sister.” (Fans of the short-lived but much-beloved TV series called Firefly might recognize this!) 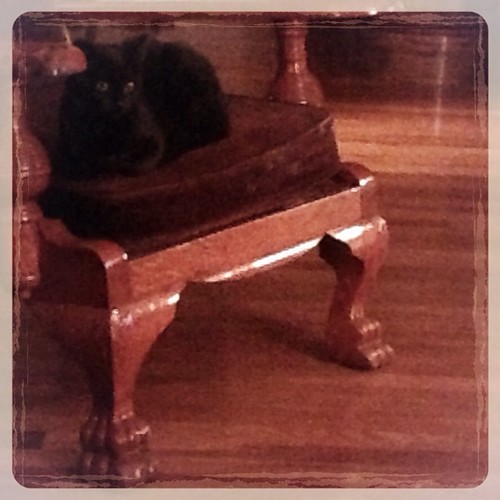 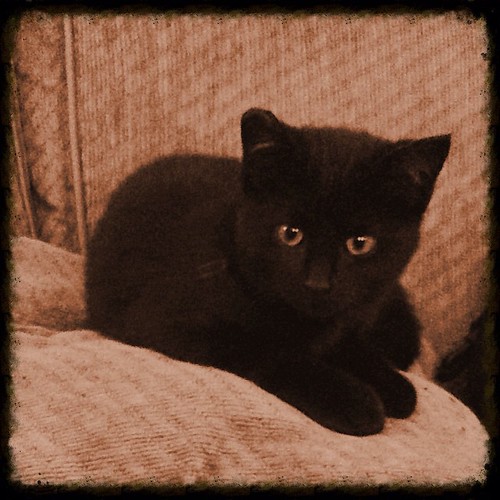 Due to a paperwork mixup we were initially under the impression that Mei-Mei’s sibling was a girl, and had decided to call her Zoë (also from Firefly); however, once we were able to get a better look at the kitten we discovered the error (much to our amusement!) and Zoë became Seamus (not from Firefly, just a name that Peter likes).

Mei-Mei spent the first couple of days in our house hiding out in the basement, but when she was upstairs, introducing her to the two big boys was fairly trouble-free. While there was some hissing from Felix over the first week or so, Oscar seemed quite fascinated with (if a little confused by) Mei-Mei, and the two of them really seemed to take to each other. 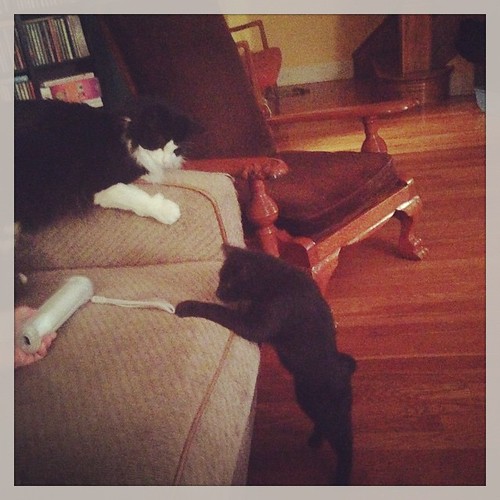 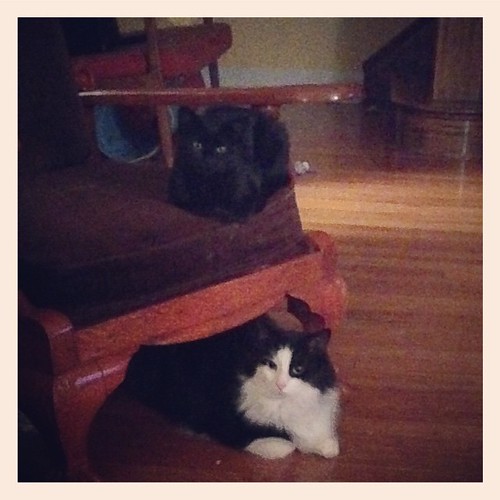 It was a bit more challenging when Seamus joined us. While there were no huge fights, there was quite a bit of hissing and growling (particularly between Seamus and Mei-Mei, strangely enough), and Seamus, like his sister before him, spent most of his time for the first several days in the basement. 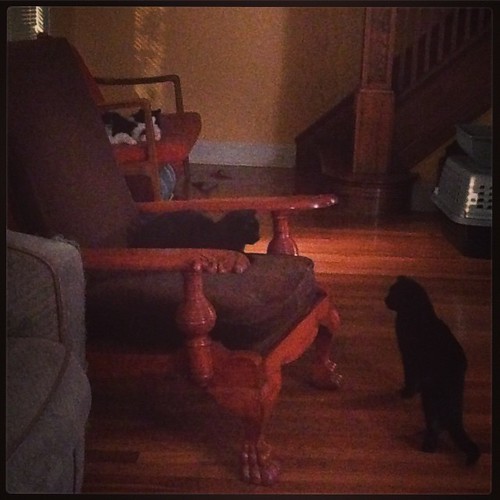 And, on top of it all, both Felix and Oscar developed some rather worrisome mouth problems (quite probably triggered by stress related to all these changes) which required a trip to the vet and a course of antibiotics.

Eventually, though, things settled down. Felix and Oscar are now back to their usual healthy, loving, and playful selves. Mei-Mei and Seamus, while still rather skittish and tentative around the two humans, get along famously with each other as well as with the big boys, and are spending less and less time in the basement (Mei-Mei in particular, possibly because she got here first and has had more time to adjust). 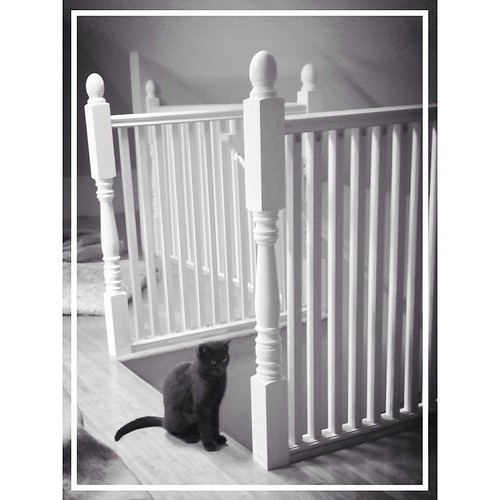 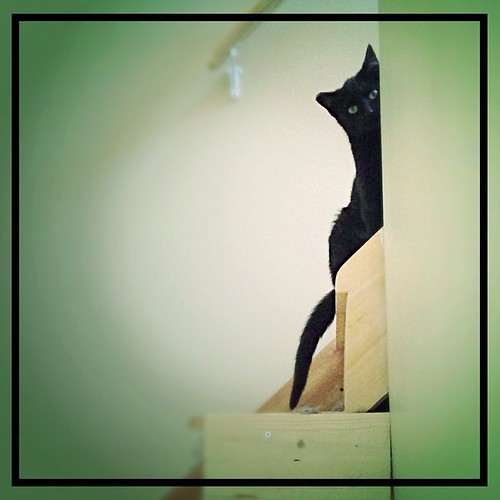 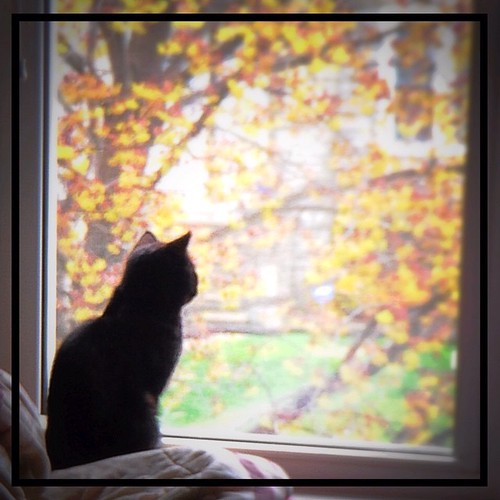 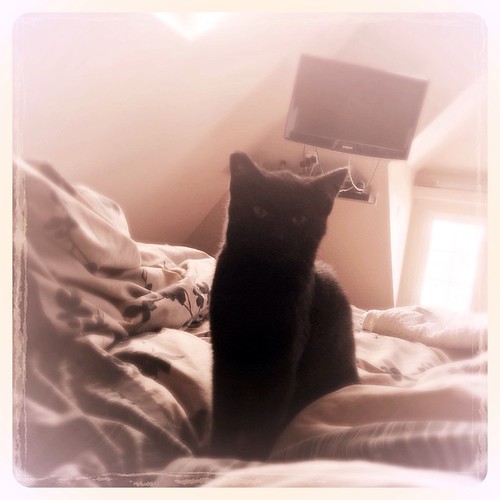 I haven’t yet had all four cats in my office at the same time, but three isn’t bad! 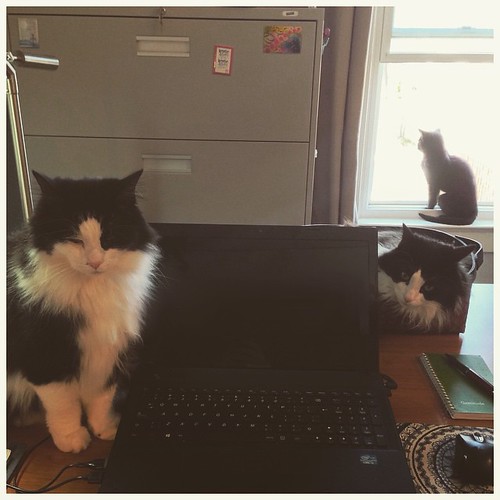 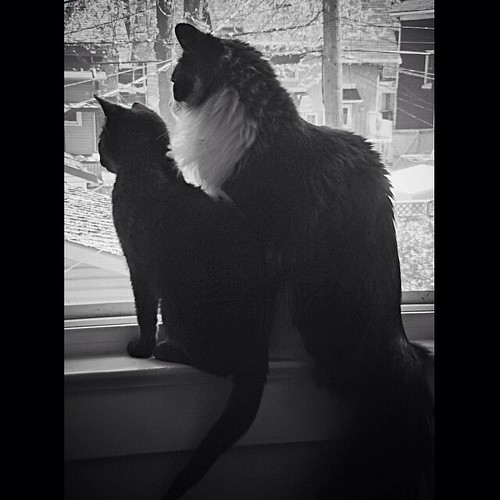 Mei-Mei seems to have quite a little crush on Oscar (can’t say that I blame her!)… 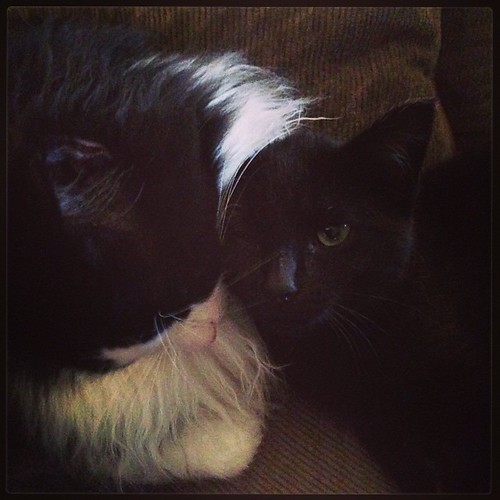 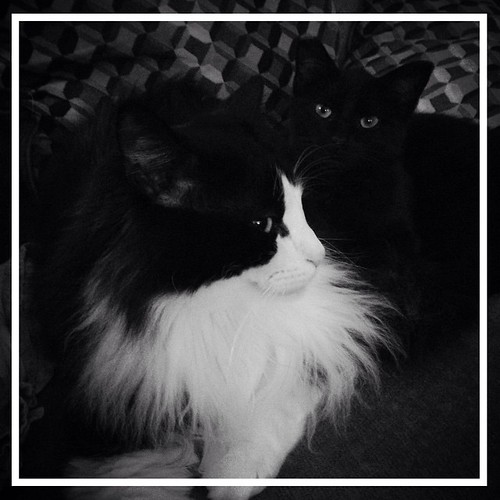 …and, in spite of his initial standoffishness, she and Felix have even warmed up to each other! 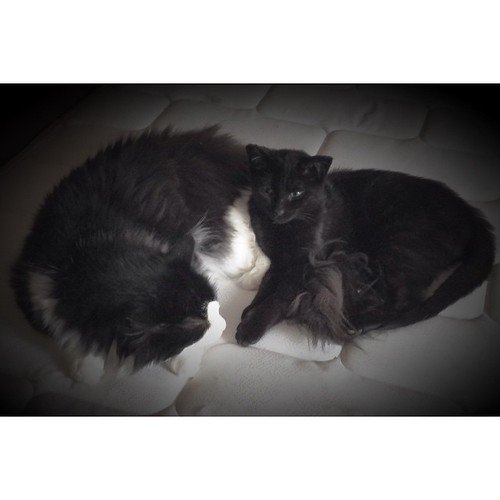 Getting close to the two kittens and bonding with them is a slow process for us humans, as their initial reaction is always to run away when we approach… but it’s getting better and better as the days pass and they spend more time getting used to us and our routines. Mei-Mei has allowed me to pet her a few times, and purred loudly all the while – then on one momentous occasion, she actually let Peter pick her up and hold her and, after a minute or two, she settled right down and made herself comfortable on him for quite some time. 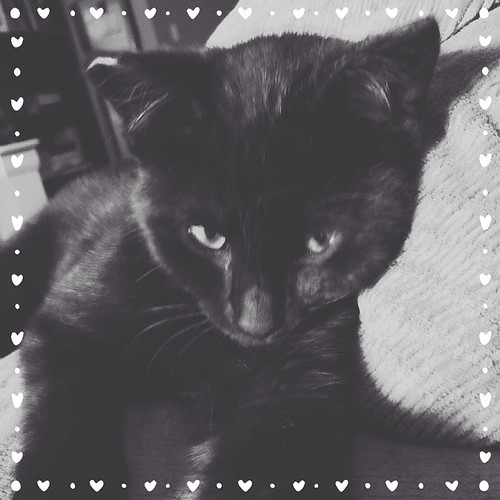 I don’t think either of us has managed to pet Seamus yet, but I can’t imagine it’ll be too long before that happens, as he’s getting more and more comfortable with being close to us (especially when we’re sitting on the couch). 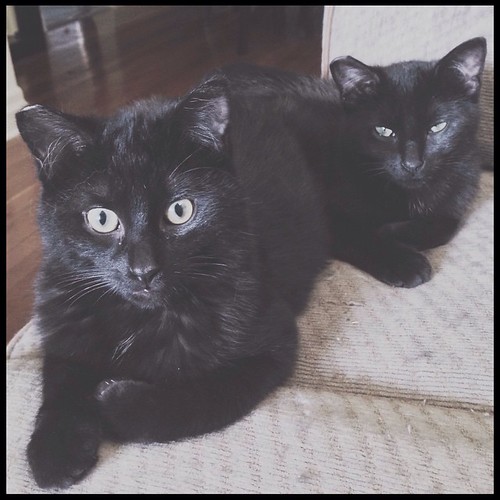 So there you have it – how we, in spite of what we thought we wanted, ended up adding two black feral kittens to our (now not-so-little) family. Two humans, four cats? Yes, I’d say that qualifies us for the title of Crazy Cat Couple! 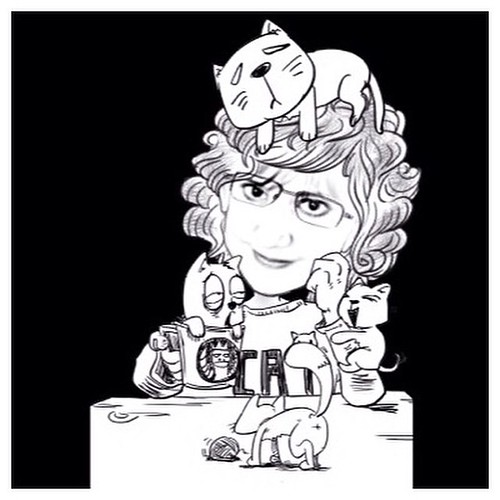 Stay tuned for our ongoing adventures!