Between the broadcast of the 2014 Academy Awards and brand new episodes of two of our favourite shows (The Walking Dead followed by Talking Dead), Peter and I were certainly spoiled for choice in terms of TV-viewing last night.

Thank goodness for the DVR!

Even after a couple of years in Ontario I sometimes forget that I’m no longer living in the Pacific time zone (i.e., three hours earlier). This isn’t a big deal normally, until it comes to things like awards show broadcasts – which I’m used to wrapping up at some point mid-evening. Not so here! I don’t remember the exact time, but I’m pretty sure it was close to midnight before Ellen waved goodnight and the closing credits started running. 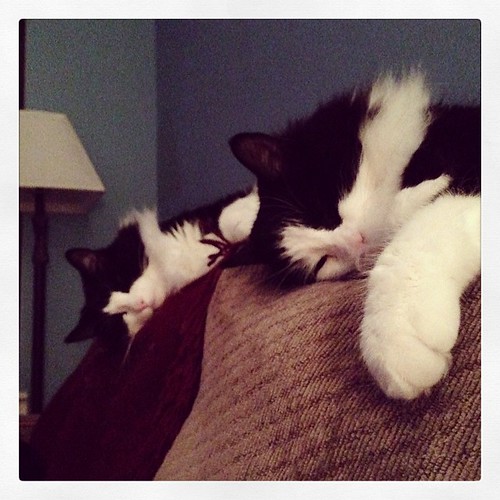 Oscar & Felix hung out with us all evening, but as you can see they were unimpressed by the Academy Awards.

Still, wanting to avoid spoilers – and since Monday is my day off anyway – we decided to make a late night of it and watch our recordings of The Walking Dead and Talking Dead after the Oscars, then sleep late this morning. So we did! And it was a fabulous, fun evening.

Of course as the saying goes, “you play, you pay” – which meant that today was a bit crazy. We slept in, had a lazy morning and early afternoon, and got a very late start on our errand-running and grocery-shopping trip. By the time we were done and home again, any notions of a creative Meatless Monday dinner went straight out the window.

On the bright side, we DID have a Meatless Monday! And our dinner was very tasty indeed, but since it consisted of store-bought four-cheese tortellini and store-bought bottled tomato and basil sauce, there’s really not much to write about in terms of my culinary adventures other than boil water, cook tortellini, heat and add sauce, and top with a sprinkling of grated Parmesan cheese.

But next week is Oscar-free… so here’s hoping I’ll be able to post something a little more interesting!

Are you participating in Meatless Monday?
What did you make for dinner tonight?
Please share!