A cautionary tale of pączki and microwave ovens

This past week was Shrove Tuesday, referred to by some as Pancake Day and also known – at least in my part of the country – as Pączki Day. I’d never even heard of pączki before we moved to Windsor, but as it turns out this yummy Polish pastry is HUGE here! Every year around this time I see notices about the various bakeries that are offering the sweet treat on Shrove Tuesday, but I’ve never got around to trying them for myself – this is, until this year, when Peter ventured out to the European Market, waited in a long line, and bought a whole box of them. 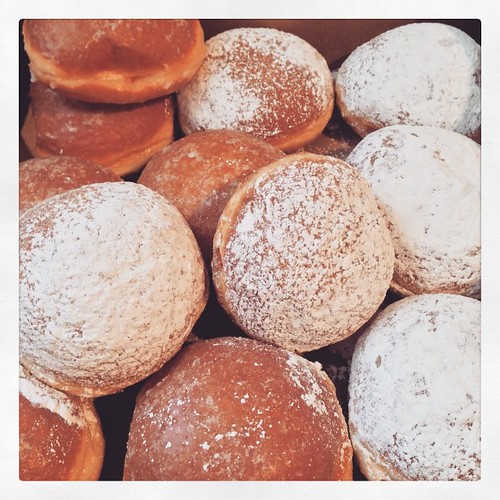 And oh, they were good! Similar in makeup to a jelly doughnut, but far more rich and substantial, we ended up with a selection filled with various delectable flavours – raspberry, strawberry, plum, rosehip, lemon, and custard – and either glazed or sprinkled liberally with powdered sugar.

The only problem was that there were a dozen of them, and only two of us. Peter tends not to have a very sweet tooth, and though I’m always able to devour goodies like nobody’s business, even I couldn’t have mowed through quite this many of them in a short time.

Fast forward to yesterday, with the few remaining and once-delicious pączki getting rather dry and stale. They were past their prime, but still oh-so-tempting – so I had the bright idea to zap one in the microwave to freshen it up a little so I could enjoy it. “Great idea,” said Peter, “but remember, it’s going to be HOT. Let it cool down before you try to eat it.” “Yeah, yeah,” I muttered, rolling my eyes a little at this obvious bit of advice as I set the timer for a mere 20 seconds – just enough to take the edge off the dryness – then settled down on the couch ready to enjoy the last pączki of the year.

I promise I was being careful – I really was! I was nibbling gently around the edges, going ever so slowly so that the centre would have time to cool off, when suddenly a huge dollop of what felt like lava-hot plum filling squirted out of the hole, ran down my chin, and landed with a searing plop on my chest.

It probably took only a few seconds for me to frantically grab my cloth napkin and wipe off the hot mess, smearing gooey dark redness everywhere (and most likely looking fairly ridiculous) in the process, but it felt like forever.

And I was left, whimpering a little, with this. 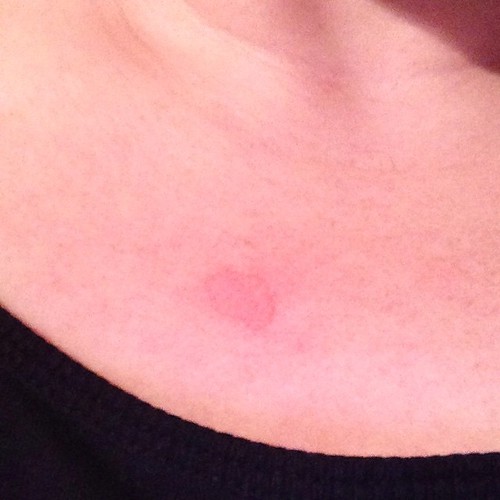 Not one of my prouder moments, I must say. I mean, I am admittedly rather clumsy… but apart from the occasional roof-of-the-mouth pizza burn I’m not sure I’ve ever managed to injure myself with food! This was a first for sure.

I’ll probably try some pączki again next year – come on, they’re wonderful! – but next time I think we’ll share our dozen with friends while they (the pączki, that is) are still fresh.

Have you ever accidentally hurt yourself with food?
Please share!