Remember how I teased yesterday that I was going to reveal the identity of my super-special Christmas gift in today’s post? Well, I’m going to do so – never fear! – but first, I have a little story I want to share that will give you a bit of context as to why this gift makes me so very happy.

Once upon a time there was a good, kind man who had been having a really rough go of things. He went through three major operations in the space of two years… spent four months confined to one level of his house… said goodbye to two dearly adored cats… worried about and supported a much loved friend and family member during their own surgery… and through it all, dealt with chronic pain. Oh, the pain! Some days it was tolerable, many days it was excruciating, but it was always there, always nagging, always pain.

One day, though, he realized that things were starting to get better! Each of his three operations had been a success, as had his friend’s, and both of them were well on their way to renewed strength and health. Memories of the beautiful cats he’d lost comforted him as he enjoyed the antics of two fluffy boys who had crept their way into his home and his heart. And the pain was going… going… soon to be gone, as he continued to heal and recover and rebuild his life.

Right around this time, someone who loved him very much and recognized all that he’d been going through decided to send a little Christmas cheer his way in the form of a generous gift of money. How fun! Now what was he to spend it on? Parts to make his computer run faster? Maybe some tools for his workshop? Or how about putting it towards that much longed-for fishing trip?

But no. This good, kind man was also the soul of generosity… and so, instead of buying something for himself, he lit up like a Christmas tree when he realized that he now had enough money to buy something his wife had long wished for – something that would make her over-the-moon happy and fulfill one of her long-held dreams – a piano.

So that’s what he did! Selflessly ignoring his own wants, he paid forward a gift that had made him happy by doing something that made someone he loved happy.

And as a result, they lived happily ever after.

So there you have it… the story of the wonderful, generous gift that delights my soul and, in the process, knocks one of the items off my bucket list! I unpacked the boxes and got it all set up last night, and as you can see it’s so very beautiful and fits perfectly into a corner of our dining room. 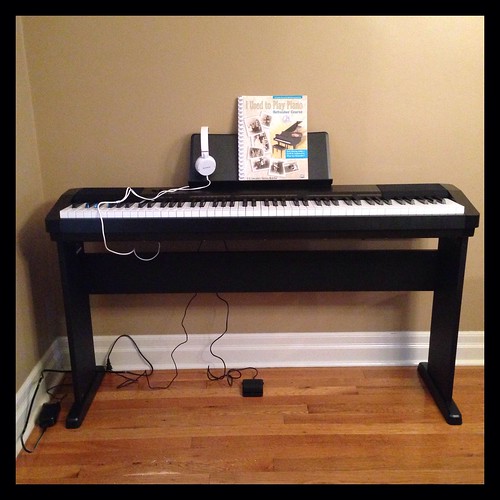 While we were waiting for my new piano to be delivered, I’d ordered a book (with accompanying CD) called I Used to Play Piano (you might recognize the cover from one of the “clue” photos included in yesterday’s post!) – because though I took lessons for most of my growing-up years I was uncertain as to how much I’d remember and wanted the confidence of a refresher at hand. Though it wasn’t actually supposed to ship until January, rather fortuitously it was sent early and actually arrived on the same day as the piano!

As I flipped through its pages I noticed a piece that I knew had special meaning and history for Peter, and so the very first thing I did on my new piano was to sight-read the right-hand melody line of Danny Boy. He recognized the tune (I must have remembered more than I thought!), and it brought tears to his eyes, so I knew my work was done. 🙂

All evening I kept pulling out old piano books and pieces of sheet music I’d brought with me all the way from Victoria to see how much I remembered… and discovered that though I’m rather stiff and rusty, the music is still in me and is, apparently, overjoyed to have a new outlet.

Happily ever after, indeed.